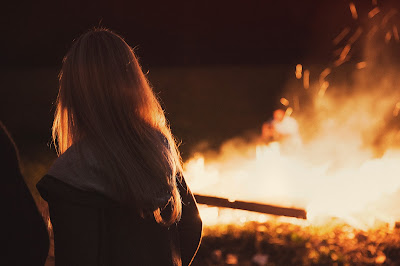 I think that most people have a complicated relationship with food.  For the bulk of us in the UK today our biggest concern is not 'will we have enough to eat?' but how can we manage not to eat so much sugar and fat that we slowly kill ourselves through the health consequences of overeating.

I know people who have had eating disorders and I know many people who have escaped the diagnosis and continue to suffer the mental and physical symptoms.  I have friends who believe they can manage their weight through bulimia. I have caught friends throwing up in restaurant toilets while their partners sit just a few feet away completely unaware.  I have bumped into anxious parents in the supermarket who quietly whisper that their child is anorexic and needing professional help.  When a relative was in hospital a beautiful, young dancer was put in the bed opposite her.  She was not allowed to go home until she started to eat again.  To the majority of people who encountered this lady, her life looked nothing less than fabulous.

The eating disorder, even if well hidden, is often completely life consuming. For some, they find that every choice they make is ruled by their disorder. Deciding what to eat, who to see, where to go, whether to accept an invite to a friend's house. At its worst, this can inhibit someones ability to study, work and socialise, leaving that person completely isolated and locked in a vicious cycle with the disorder.


Mental illness with a physical impact


Mental Health is a thread that runs through a number of the fortycubed charities, notably through Mind and Place2Be but for the majority, mental health will be impacted by whatever challenge an individual is having to face.  Eating disorders are often hidden from friends and family until the physical result has reached extreme levels.

I have fought to protect my daughters from the unrealistic portrayal and expectations of women in the media and I am very grateful to the Body Image Movement led by Taryn Brumfitt which is taking on this challenge on an international scale.

'The Body Image Movement (BIM) was founded on the belief that your body is not an ornament but the vehicle of your dreams. BIM believes that everyone has the right to love and embrace their body regardless of shape, size, ethnicity or ability.  By traveling the globe the BIM is working to put an end to body loathing and spread the message of body loving.'

The BIM produced a documentary film entitled 'Embrace' to spread their message and several people who feature in the film have a history of eating disorders and offer their experience and advice to viewers.

I've recently read Grace Victory's book 'No Filter' where she shares (among lots of other things) her relationship with her body over the years and her experience of eating disorders.  I will be making sure my daughters read her harrowing but inspirational story to help educate them for their own sake and to arm them with information that will help them look out for their friends.

Beat is the UK’s eating disorder charity. Its vision is an end to the pain and suffering caused by eating disorders. 'We have been a champion, guide and friend to anyone affected by these serious mental illnesses since our founding in 1989 as the Eating Disorders Association, giving sufferers and their loved ones a place where they feel listened to, supported, and empowered.'

Beat offers helplines, message boards, online support groups, helpfinder (to find local services) as well as running regional projects.  If you would like to make a donation to the work of Beat please do so via this link.


Beat offers a quick checklist to help concerned friends and family look for indicators of an eating disorder:

Hips - Do they have distorted beliefs about their body size?

Lips - Are they obsessive about food?

Flips - Is their behaviour changing?

Kips - Are they often tired or struggling to concentrate?

Nips - Do they disappear to the toilet after meals?

Skips - Have they started exercising excessively?

Beat advises : 'If you’re worried someone you care about is showing any signs of an eating disorder – even if they’re not on our list – act quickly and get in touch. We can give you the answers and support you need to help them on the road to recovery as soon as possible. Don’t delay. Visit b-eat.co.uk/tips'

To support the work of Beat, please consider making a donation here.