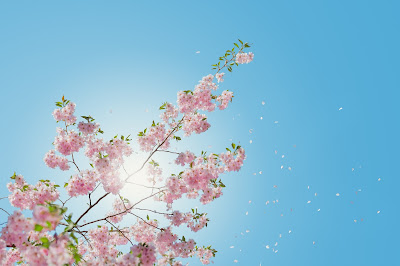 “A woman is like a tea bag; you never know how strong she is until she’s in hot water.”

Beth has never indulged in drama.  She is a powerhouse of inner strength. In our 30 years of friendship we have been through some ‘stuff’.  I will never be able to thank her enough for taking on my pony when I disappeared for days on end to the hospital to be with my mum.  And yet, Beth has always quietly dealt with what life throws at her and then tells me afterwards.

So when Beth was told to prepare for the possibility of her daughter’s little body being overcome by meningitis; when she was asked to call her parents home from a holiday abroad so they had an opportunity to say goodbye; Beth didn’t call me.  About a week later, a composed and hopeful Beth picked up the phone.  She explained what they had been through and that things were looking better for Sophie.


Sophie is now a fabulous and fiercely independent almost 5 year old who seems unaffected by what she experienced.  Beth, on the other hand, will forever by affected by those events and forever grateful for the happy outcome whilst acutely aware that not all families have been so fortunate.  So together, as part of my Fortycubed plan, we will be fundraising for the two charities that supported Beth through this difficult time and also to raise awareness of some of the potential, lesser known signs of meningitis. I asked Beth to give us an insight into this traumatic experience.

Don't wait for a rash


'The first sign I had that something was wrong was Sophie being sick. This started at 4pm on a Friday totally out of the blue.  At this stage she had a slight temperature but not too high so I put it down to a sickness bug.  I checked on her several times during the night and she seemed to be improving so  I was reassured that it was just a bug and she would be better by the morning.

My first indication that something was seriously wrong was at 7am when she had thrown up some blood, was very limp and lethargic.  Her skin had become blue and mottled.  Her temperature was very high and she had cold hands and feet.    I called 111 who sent an ambulance.  Within half an hour of arriving at A&E, she had collapsed and was rushed into the resuscitation unit.

We were left sitting outside for half an hour while they put her onto life support. The consultant came out to us and sat down next to me;  she put her hand on my knee and said ‘Sophie is seriously ill and I am very, very worried about her’  At this time we were told her chances were not good and to call in any family members who might want to see her.   It was one of those surreal moments where you can't believe it is happening to you.

She was then transferred by ambulance to the John Radcliffe Paediatric intensive care unit in Oxford.  At this stage they did not know what was wrong with her but she was on life support and they gave her antibiotics immediately even though they did not know what they were treating.   A rash appeared on her hands and feet on Saturday afternoon, 24 hours after the first signs of illness.  I think people always think the rash is the first thing to appear but not in our case it was the last thing to happen.   Septicaemia had already set in by then.

The consultant advised us on the Friday when she was first admitted to hospital that they would normally perform a lumbar puncture but, as her platelet count was so low and her blood was not clotting, they could not do this.  Instead they had to take a sample and grow a culture in the lab which takes 48 hours, so it was Sunday afternoon when we were told she had Meningococcal Septicaemia and Meningitis (type W135). 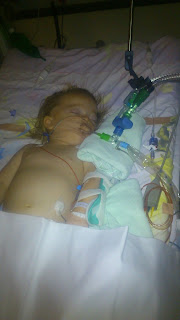 We were very fortunate to be in the right place at the right time when she collapsed and the doctors got antibiotics into her straight away before they knew what was wrong.  By doing this, they saved her life.  Later during the week we saw a plastic surgeon who came to look at her hand as they were worried about the extent of the rash and discussed with us that they may have to amputate her hand if too much of the tissue had died.  At this stage, it seemed a small price to pay after nearly losing her but thankfully enough of the tissue had survived and her hand recovered. 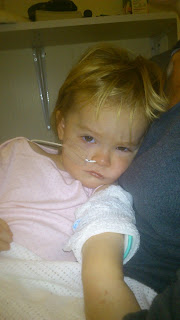 Sophie remained in an induced coma for a week in intensive care and was then transferred back to the local hospital and spent a further week on the ward.   In total, she was in hospital and on antibiotics for two weeks.    I was then advised that a further four weeks recovery was needed at home.  However, children do recover quickly as they don’t carry the emotional baggage we do and she was back to her normal self soon after leaving hospital.


The road to recovery

We then had to go for three further follow up appointments with the consultant over the course of the next year.  Sophie was also referred to the Audiology Department for a further year where regular checks were carried out on her hearing which, thankfully, has been left unaffected.  The only possible long term issue for Sophie now is minor brain damage.  I was told that this would not become evident until she started school so I have spoken to her teachers and they will advise me if they have concerns. 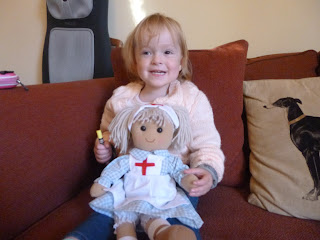 As far as lasting effects on me there have been a few!  I was offered counselling whilst in the hospital but at that time I declined as I just wanted to be with Sophie. I felt selfish worrying about myself when she was so ill and had no idea of the long term effects that decision would bring.  I became very anxious in the year following Sophie’s illness and when I finally saw a doctor I was diagnosed with Post Traumatic Stress Disorder.  I have received help for this but it is an ongoing thing that I have to learn to manage and, like Jac said in her blog on Mind, it is a beast that walks among us. I still struggle with it and some days are better than others but compared to what many other families have been through, I consider myself lucky.

My words of advice for parents would be not to wait for the rash to appear as by that point it may be too late.  If the child has a high temperature and really does not seem right get them checked out straight away.  Don’t feel you are overreacting or wasting the doctor's time.  It is always better to be safe than sorry.'

How can I help?

Apart from raising awareness of the signs and implications of meningitis, Beth and I are fundraising for Meningitis Research and Ronald McDonald House Charities.

Meningitis Research's vision is to live in a world free from Meningitis and Septicaemia.  They research Meningitis with a hope to one day eradicating this disease.  They also offer advice and support to anyone affected by the disease.  As an example, they offered Beth a befriending service so she could speak to other parents who had been through the same experience.

Ronald McDonald House Charities gave a lifeline to Sophie's parents when she was ill.  They were given a private, clean, comfortable room with an ensuite bathroom including free toiletries.  The room was in the hospital only a two minute walk (one minute run if necessary) back to Intensive Care and they had a phone in the room with speed dial to the ward.

Beth is a qualified massage therapist and we will be running a "Massage Marathon for Meningitis' as part of the Fortycubed fundraising campaign in the coming months.  In the meantime, if you would like to donate to either of the charities Beth has chosen, please do so via the following links: